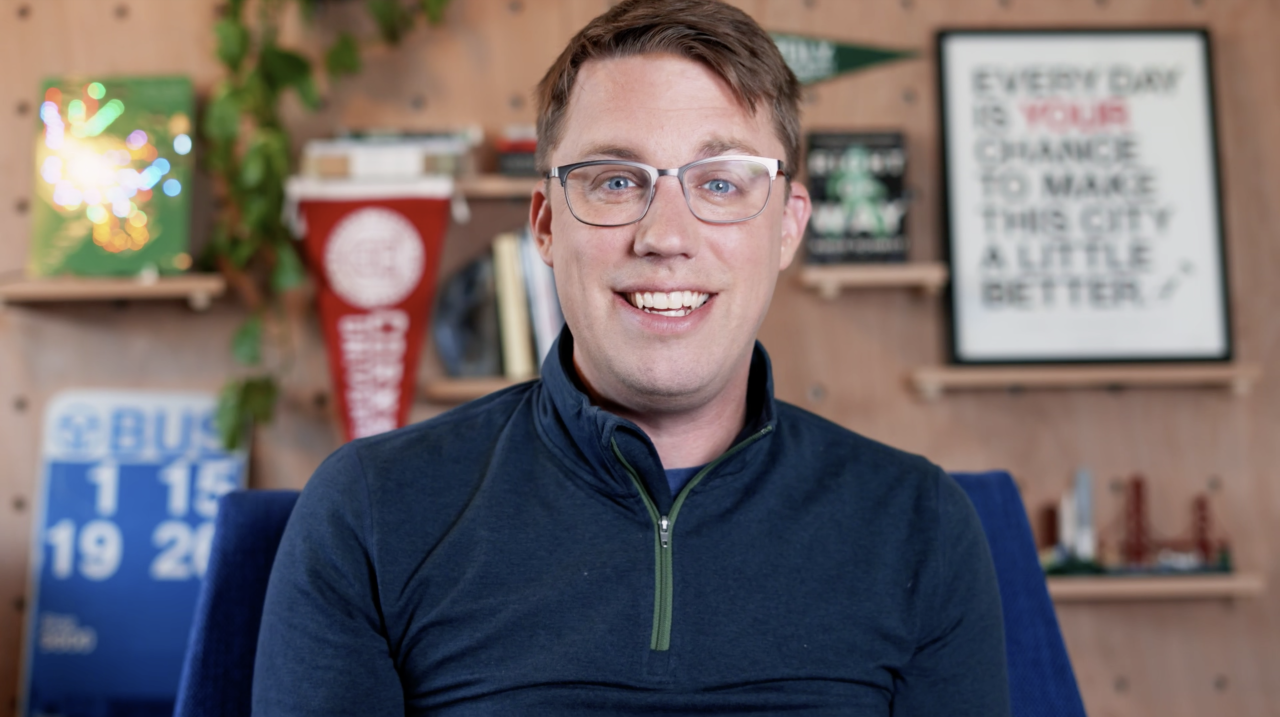 Our newest member of the City and Regional Planning department, Dr. Dave Amos (he/they), is a planning professor by day and a planning YouTuber by night. Since his arrival to Cal Poly in Fall 2021, he has taught CRP 212, Introduction to City Planning, and CRP 410/411, the fourth-year comprehensive planning studios. Meanwhile, he also works on his YouTube channel, City Beautiful. When asked about the origins of his channel, Amos explains that when he was a planner, he “would often talk to advisory committee members or city councils and explain a concept like healthy communities or complete streets” to citizens who did not have a formal education in planning. He wished there were videos he could show them, but few existed.

Dave had that thought in the back of his mind when he taught an introductory planning course for his Ph.D. at UC Berkeley. He realized his lectures could become great videos, so in January 2017, he produced his very first video that took four months to make titled, “Why do so Many U.S. Cities have Gridded Streets?” From his initial commitment to make one video every month, Dave Amos upholds the mission for the City Beautiful Channel: “to teach as many people as possible about the places they live in.” The channel strives to answer commonly-asked planning questions because “it’s taken for granted that the places we live in cities have everything we need to know. But often, we wonder why there’s housing here and businesses there...why cities are the way they are.” It is this same curiosity that garners an audience of 350,000 subscribers and 30 million channel-wide views, 60-65% being international.

When asked about Cal Poly’s City and Regional Planning curriculum, Dr. Amos reveals he was impressed that the planning students possessed such advanced “technical skills and professional experience” such as knowledge of CAD, Adobe Creative, and the internship graduation requirement. With a hybrid of theory and practical work skills, Professor Amos says Cal Poly students “are the most prepared students [that] I’ve seen in my time in academia.” As a result, he adds that graduates leave with more tools in their tool belts than most planning programs. For example, the curriculum is designed to have second year undergraduate urban design studios and later more comprehensive, policy design studios with a real-world client later during the fourth year. When asked why he chose to teach at Cal Poly, he explains one of the driving forces was the great faculty that are expected to be excellent teachers.

Before Dave was a professor, he was in the same shoes many other students were in: seventeen years old and unknowing of what career he wanted to pursue. When his high school teacher gave him a book with a chapter in urban planning, Dave was captivated by how he  “could work in a community and see positive change.” Dave received his undergraduate degree in Urban and Regional Studies from Cornell, worked in the non-profit sector, and later graduated with a Master of Architecture and a Master of Community and Regional Planning from the University of Oregon. After working as a consultant land use planner in Sacramento post-grad, he returned to academia and attended UC Berkeley for his Ph.D. in City and Regional Planning.

Dr. Amos’ advice to undergraduate and graduate students is to “have a plan but be flexible.” He encourages people to explore the field through internships and trace the careers of inspiring planners to discover potential career paths. At the same time, Dave advises to embrace life’s curveballs and unconventional learning experiences that often occur organically outside of academia and working. For example, when asked how he travels within a new city, he tries to experience the unfamiliar environment just as a local would: using transit, avoiding tourist destinations, and getting into the neighborhoods by simply experiencing them. It is this same passion and curiosity that makes Dr. Dave Amos a fantastic YouTuber and addition to the Cal Poly faculty.