Planning and design studios are fundamental for the CRP department mission and both the undergraduate and graduate curriculae. As the best vehicle for Cal Poly's learn-by-doing pedagogy, the studio experience allows students to engage in quasi-real projects and work with real cities and their officials, stakeholders and communities, helping them to become better prepared for professional life.

An Urban Design for Collaboration and Innovation at Cal Poly.
The two sections of this studio collaborated in designing the core of Cal Poly campus according to the university long term plan. Students proposed new academic and service buildings with restaurants and coffee shops, and an innovation center at the heart of Cal Poly campus. The common goals of the proposals included encouraging interaction between students of various disciplines and faculty members of the Cal Poly community, creating a walkable and vital campus throughout the day and year, and encouraging outdoor learning and social activities with the help of green roofs, and various types of plazas and open spaces. 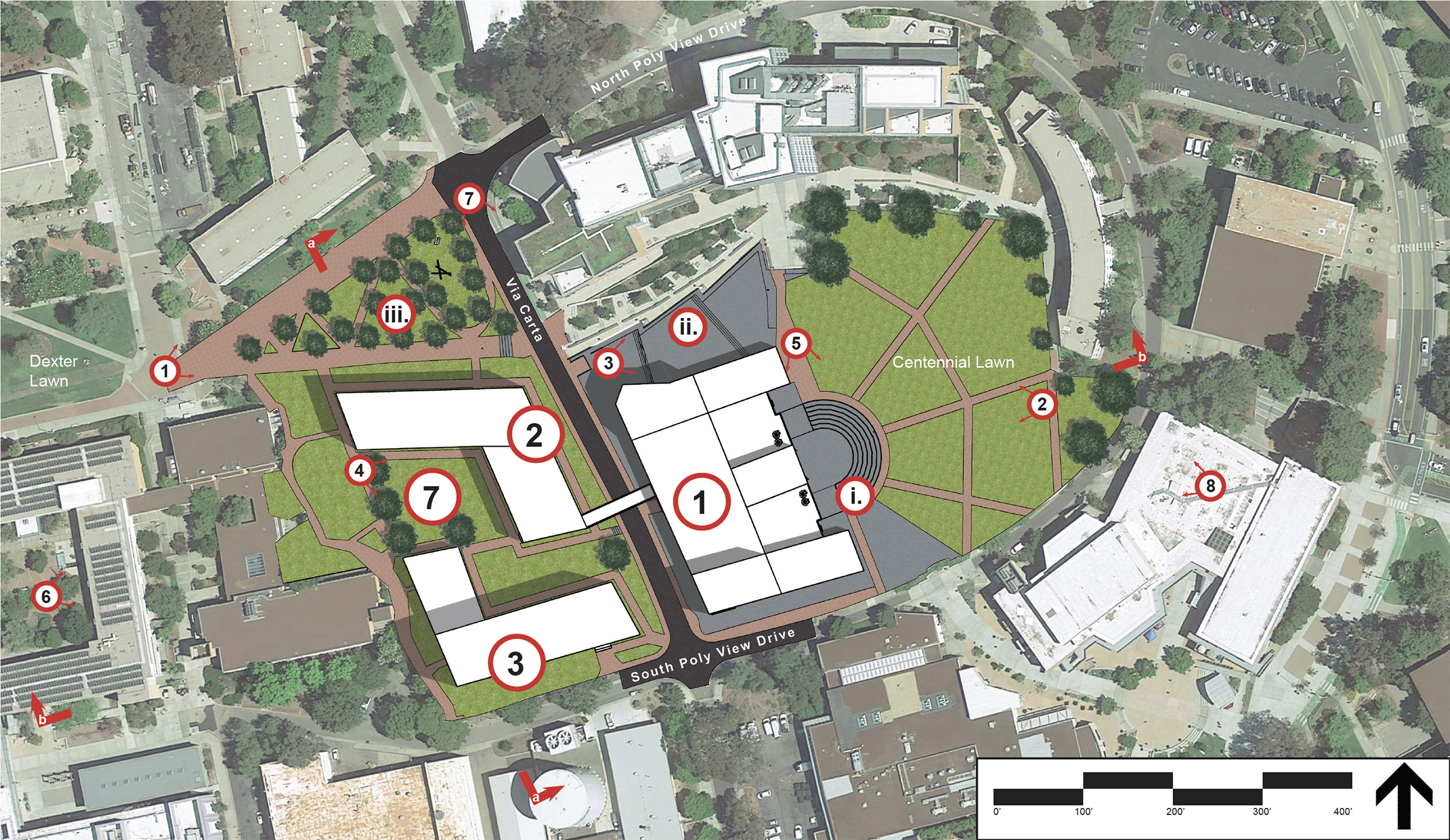 Gateway Site Development in Paso Robles, CA.
Both sessions in this studio got involved in contributing to the City of Paso Robles Community Development Department by envisioning development alternatives for an 8-acres site located at the corner of Spring and Fourth streets. Currently, the site is a partially occupied low-income apartment complex scheduled for redevelopment in the near future. Based on the site's excellent location and easy access to the downtown, Highway 101 and the Salinas River, the student teams presented several alternatives which included ideas for mixed-use development, affordable apartments, high-density town-homes, and public open spaces. 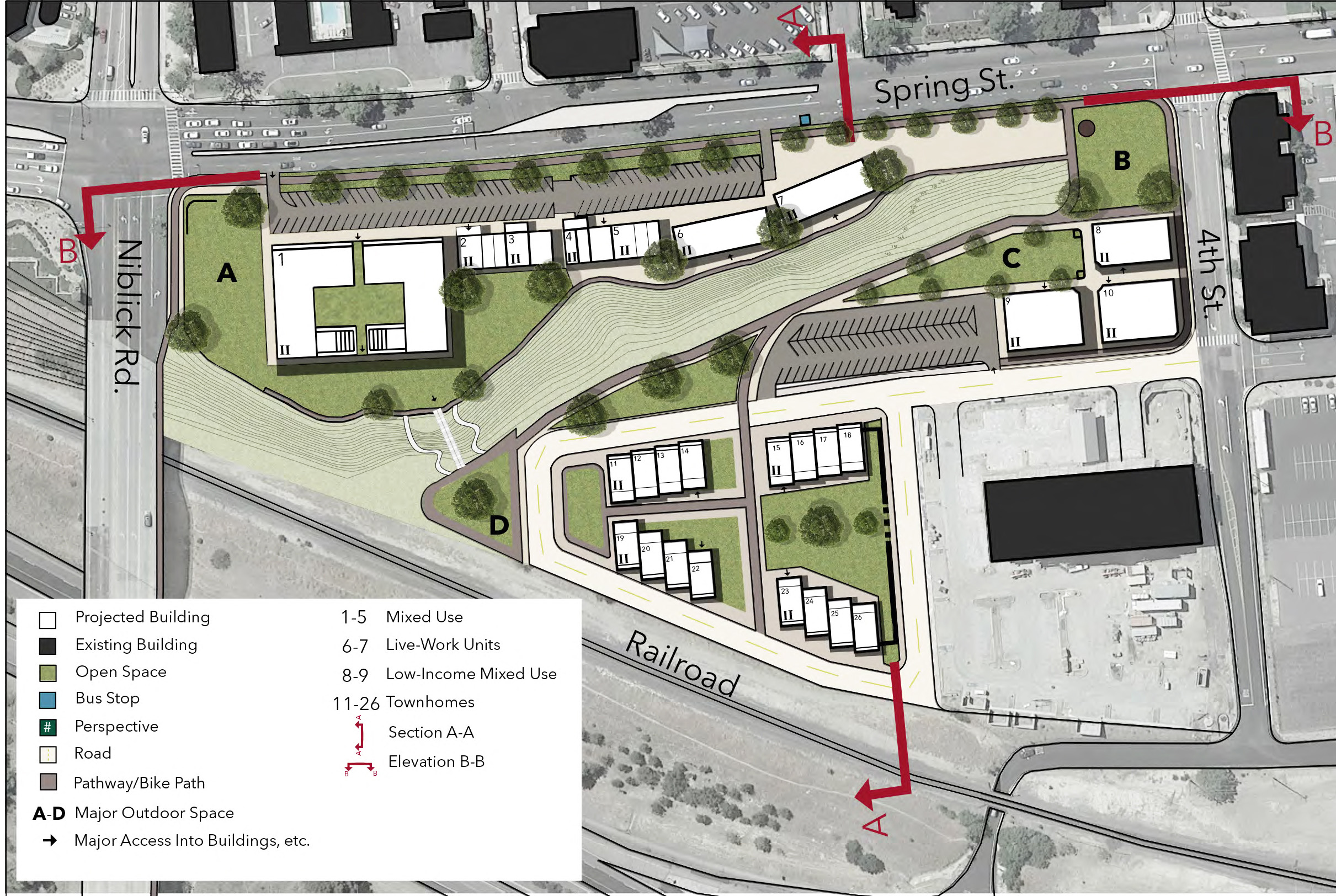 Rethinking Downtown Glendora, CA
This third-year undergraduate studio contributed to the City of Glendora long-range planning efforts by developing an urban design vision to strengthen the linkage between the Old Village, the future Metro’s Gold Line Light-Rail Station, and Route 66. Although the project area is located in the heart of Glendora, but holds a hodgepodge of underutilized land, commercial and office uses, warehouses, small industries, as well as town homes and single-family residences. It is expected that, when the Metro line and the station are ready they will cause significant impacts on the project area. Divided into nine teams, the students developed different alternative plans, with medium and long scenarios, for public and private development as well as circulation and streetscape concepts. The proposals were present to the planning commission and the city council, and are helping the planning department to educate developers on the possibilities and to help direct public investments. 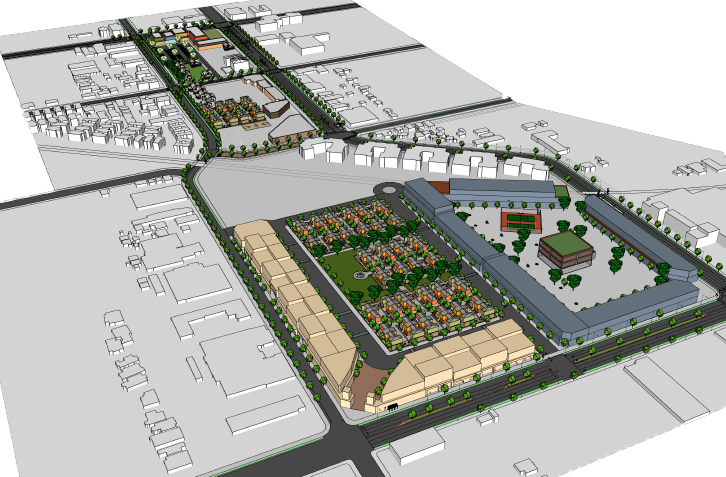 Redevelopment Visions for the Paso Robles Boy’s School Site.
The task addressed by students in the first year MCRP design studio was to envision "outside the box" creative redevelopment alternatives for the Paso Robles Boys School site. Located on the edge of the city the 155-acres site fronts Airport Road, is close to Paso Robles Municipal Airport, and, until 2009 housed a State youth correctional facility. Advanced manufacturing, wineries, and recreational and service facilities surrounded the site for which four options were developed: 1) VinoTech: a vibrant and flexible office and industrial park, a connected  pedestrian-active complex designed to capitalize on the beautiful rural environment; 2) Adaptive Reuse Park: using the existing mid-century modern structures for new industrial and commercial development, such as cannabis manufacturing, mixed office, and light industrial; 3) Soccer Complex: a regional/state destination-soccer-facility with 20 full-size 5 youth-size soccer fields, food services and a climbing wall; 4) Gateway Conference Center: a center that also includes a performing arts center, a wine museum, a hotel, and retail and office facilities. 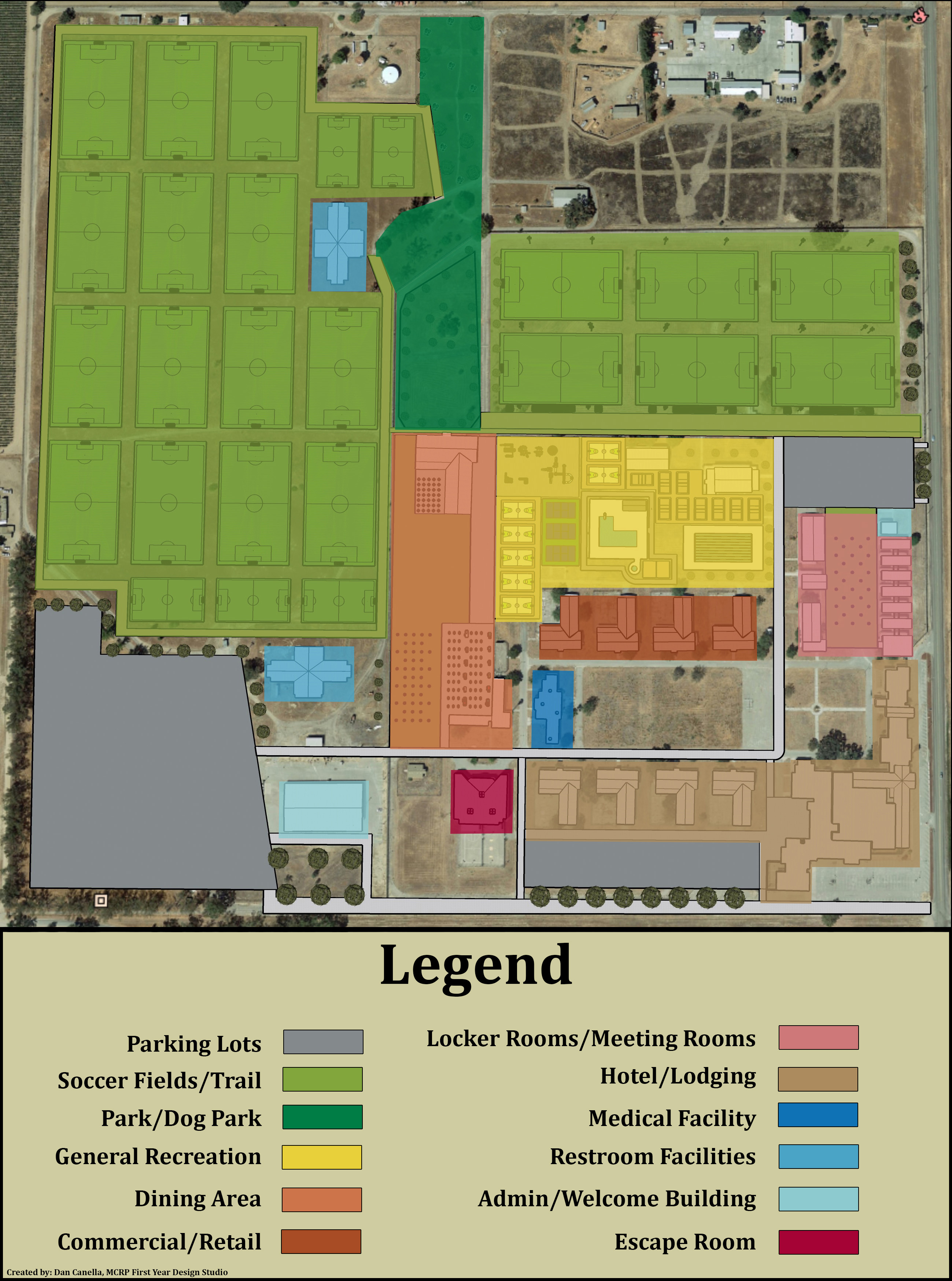 City of Parlier General Plan Update.
The studio’s client for Fall Quarter 2018 and Winter Quarter 2019 was the City of Parlier, population 14,500. Located in the Central Valley approximately 20 miles southeast of the City of Fresno, the City is primarily supported by the surrounding agricultural operations. The City has high aspirations yet is severely financially constrained.
The City’s General Plan Elements have not been updated for a considerable number of years. One of the challenges faced by the students was developing policies and implementation measures that recognized the City’s limited resources yet advanced the vision expressed by the residents and Council. Four community outreach activities were held including meeting with the students at Parlier High School. The students also held a working session with Department Heads and Council members.
In March of 2019, the students presented their recommendations to the City Council, who were very appreciative of their work. 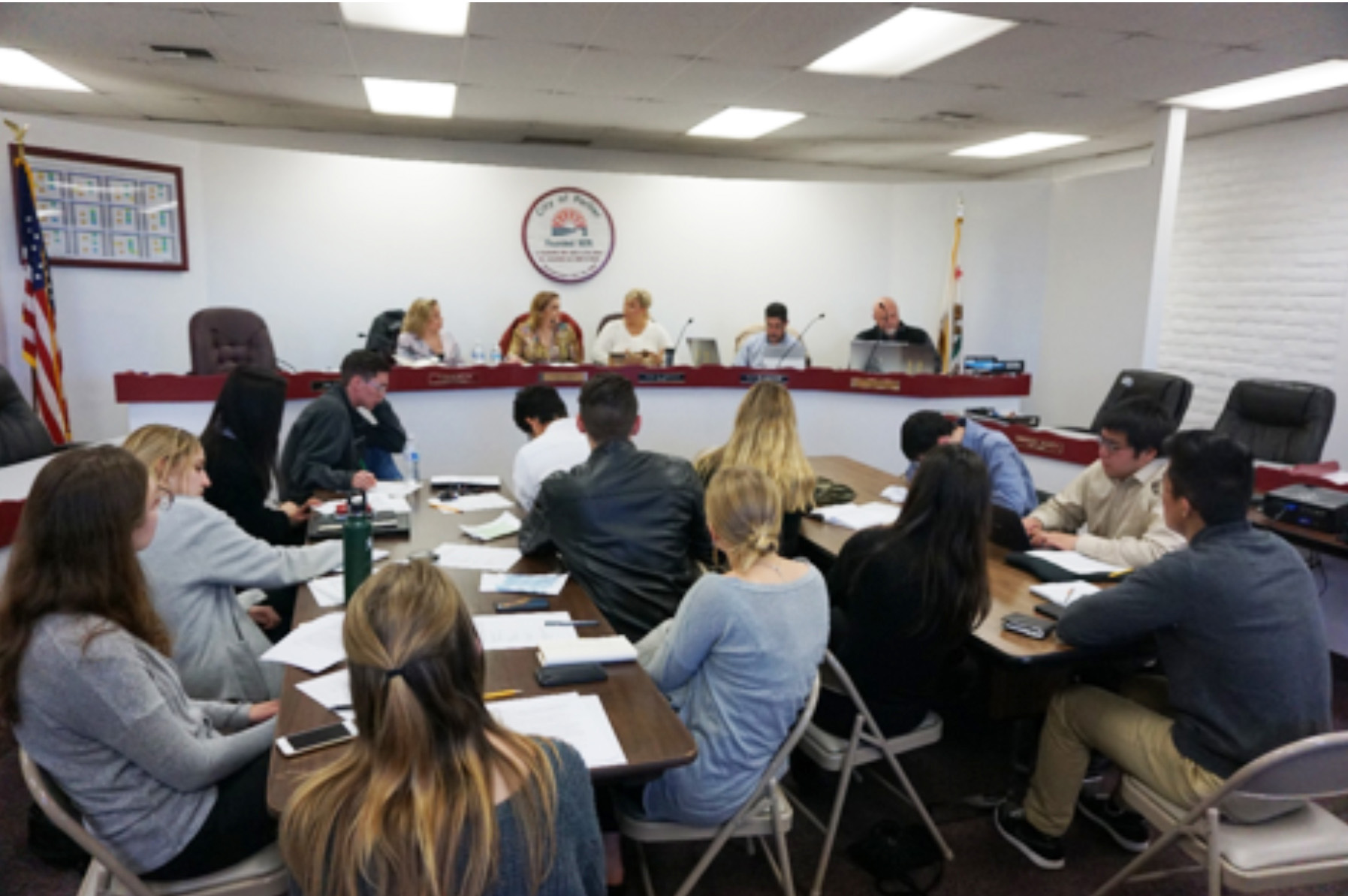 Oceano Community Plan Update.
This pro bono studio included 20 graduate students who prepared a comprehensive revision of Oceano’s Community Plan. Oceano is a small coastal non-incorporated community in San Luis Obispo County located about 13 miles south of the City of San Luis Obispo. Surrounded by fertile agricultural lands, Oceano has a small local airport and 1,500 acres of its coastal sand dunes is dedicated to the only state park where visitors can drive recreational vehicles in. Its 8,262 residents (2016 U.S. Census) share a median household income of $52,259, well below the County’s and California’s state median.
The studio collaborated with the county and Oceano residents and stakeholders in formulating the plan and a development scenario to accommodate aspirations for growth in population, housing, and jobs by 2040. The plan allows Oceano to improve its residents’ quality of life, provide diverse housing options, generate economic vitality, and enhance its attraction as a coastal community with tourist potential and one of the relatively more affordable places to live in the county. The work was so well received that garnered coverage on KSBY, a local television station affiliated to NBC.
The work involved a thorough analysis and comprehensive update of the existing Community Plan guided by extensive research on community characteristics, opportunities and constraints for development, as well as by public feedback. The plan includes detailed long-term goals, objectives, polices, and programs to inform future development, in thirteen Elements: Land Use; Circulation; Conservation; Housing; Environmental Justice; Economic Development; Public Facilities; Safety; Health; Open Space; Noise; Community Design; and Air Quality. Three distinct alternative growth scenarios were presented to the community who preferred the scenario that includes a variety of changes to land use in designated growth areas to accommodate infill development for housing and commercial growth; repurposing of a sparsely-used airport area into vibrant, mixed-use, and regional open space; and redevelopment of the Industrial neighborhood. 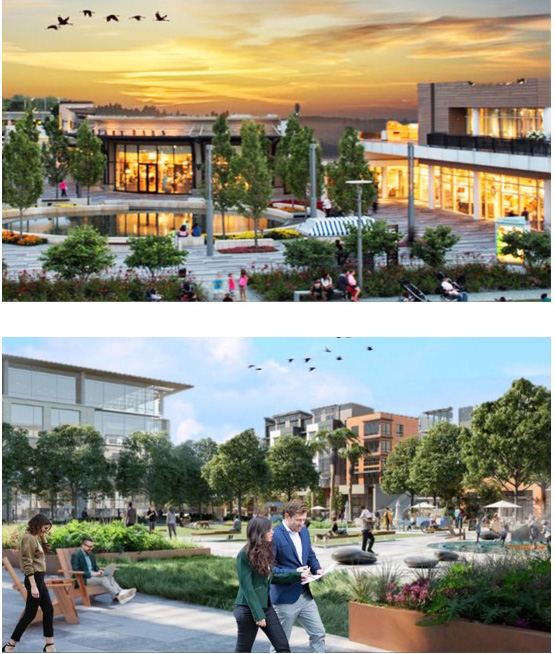 CRP 552/554: Vision for the Oceano Airport redevelopment which includes clustered housing and mixed use to accommodate the most aggressive population and job growth with regional and community open spaces. 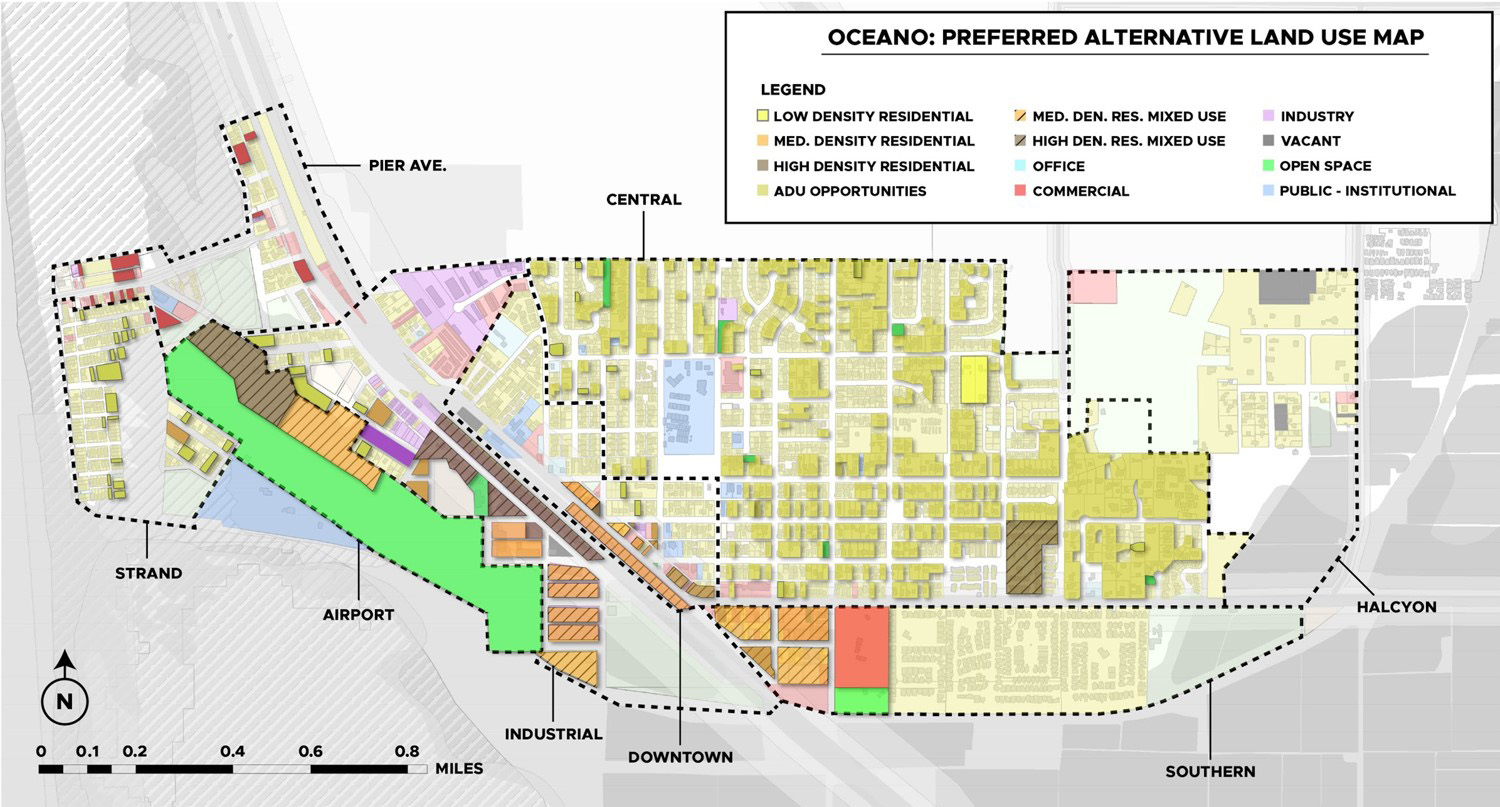