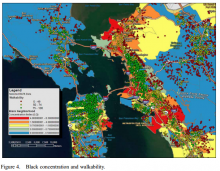 CRP Research Featured in The Atlantic

Assistant Professor of City & Regional Planning William Riggs recently had his work featured in an article in The Atlantic by Richard Florida.  The article focused on Riggs' work to evaluate the inclusivity of the most walkable areas in cities, using a case study of the San Francisco Bay Area.  Riggs found that areas with the fewest concentration of black residents, are some of the least walkable in the Bay Area - a factor not wholly tied to housing values when controlling for price.

The article underscored Dr. Riggs' findings that there were many push and pull factors other than walkability influencing residential choice other than neighborhood, and that more research was needed to understand and address the equity issues in access to walkable areas.  The full paper is available open access at: http://www.tandfonline.com/doi/full/10.1080/13549839.2014.982080.

The work of CRP lecturer, Ken Topping is featured in the Winter 2015 issue of Evidence Matters, US Department of Housing and Urban Development's (HUD) Office of Policy Development and Research quarterly bulletin.

Faculty member William Riggs was recently featured in the Washington for his work on two-way street conversions.  The article entitled, "Why one-way streets are bad for everyone but speeding cars," focuses on research that tracked neighborhood conditions for 3 years after the conversion of a multi-lane, one-way street to two-ways.  Riggs and his co-author Dr. John Gilderbloom from University of Louisville found that traffic collisions dropped steeply following the conversion.  More details can be found at: http://www.washingtonpost.com/blogs/wonkblog/wp/2015/04/17/why-one-way-streets-really-are-the-worst/​

Adding to recent awards from the Central Coast Chapter and State, the BSCRP third year studio in Milpitas (completed by current seniors in the BSCRP) recently won the national AICP Honor  Award, given in recognition of special achievement by undergraduate planning student.  The plan was the only award recipent from an undergraduate program, and was advised by Dr. Hemalata Dandekar and  Dr. Vicente Del Rio.

One Wednesday 2/11/2015, from 11am-noon, CRP & RCRI welcome Dr. John Gilderbloom for a lecture entitled, "The 10 Commandments of Urban Regeneration" in the Dexter Fireplace Room (Building 34, Room 210). Dr. Gilderbloom is an expert in sustainable urbanism and has published widely in the areas of housing, community development, sustainable design and livability.  He has been listed a top urban thinker by  Planetizen (http://www.planetizen.com/topthinkers).

UC Berkeley's ITS Library recently featured a discussion of case study work by Dr. William Riggs.  The research describes how balancing transit incentives and parking pricing can shift travel behavior, and how social incentives have the potential to be as effective as fiscal incentives is influencing mode choice. http://dx.doi.org/10.1016/j.cstp.2014.07.009 CRP Professor Dr. William Riggs recently released the findings from a study on the use of technology in city planning departments in 523 cities across the United States.  Published on Planetizen.com the key findings from the study include:

Full results and a summary can be found at: http://www.planetizen.com/node/73480

CRP Professor William Riggs is honored to be mentioned in an article written by Richard Florida, an American urban studies theorist. The article talks about walkability in neighborhoods and how it can shape housing prices, health, crime rates, etc.  Read the full article written by Richard Florida here:http://www.citylab.com/design/2014/12/growing-evidence-shows-walkability-is-good-for-you-and-for-cities/383612/

Cal Poly's City and Regional Planning has won four annual awards for the project "Urban Design Visions for the City of Milpitas, CA" (CRP 341 Urban Design Studio III).  The project received three awards in 2014 from the American Planning Association (APA): the Academic Award of Excellence from both the Northern and the Central Coast Sections, and the Award of Merit from the State Chapter. In 2015, it received the prestigious national Honor Award from the American Institute of Certified Planners (AICP).

These awards showcase excellence in urban and regional planning over a variety of categories and are highly competitive.  Winning is truly an accomplishment to be proud of. In the case of the AICP, it was the first time that an undergraduate project had won the award!

A video of the student work is available on our YouTube Channel. A links to view the awards website and all the award winners are provided below.