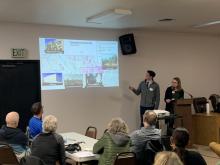 One Cal Poly professor says Oceano hasn’t updated its general plan since the 1990s. General plans guide how and where communities should develop. They are required by state law.

“It’s supposed to be based on broad community support, not to be influenced by one person or a group of people. What is the aspiration of the broad mass of the people? said Cornelius Nuworsoo, a Cal Poly professor.

Students are drafting a plan for Oceano for their yearly project.

See the complete story and video on KSBY TV.

These are findings from a ten-week concept design effort to develop pre-planning insight, urban design concepts and development strategy for the City of Newark's Old Town. The design concepts focus on the Thornton Avenue Corridor between Cherry Street to the East and Ash Street to the West organized into five blocks integrated by street-scape design.

The investigative and design work was completed in three phases of discovery and visioning:

Phase one involved the review and detailed investigation of existing regulatory and design factors underlying the site area including analysis of planning documents and the implications of regulations for site development, individual lot survey and documentation of lot conditions, and interviews and surveys of community members and business related individuals in the area.

Phase two involved development of concept plans that were organized around three discrete design themes and priorities:
1. The Historic theme featuring concepts that reinforced the underlying historic significance and character of the site.
2. The Design theme featuring investigation of architectural styles and mix that would complement the existing buildings on the site.
3. The Housing theme featuring investigation of optimal capacity in the project area to develop a mix of housing unit types to address housing demand.

All three concepts plans were accompanied by a redesign of Thornton Avenue streets-cape to accommodate multi-modal traffic, implement a road diet to bring down vehicle speeds and to create a “bikable” and pedestrian friendly environment. These concept plans were presented to the community. Comments and suggestions that were received informed the final concepts.

Phase three involved envisioning urban design futures for five discrete block-segments of Thornton Avenue. The five segments focused on: 1. Developing a rich and diverse housing mix; 2. Creating a central plaza and performance space for community events as the center of Old Town surrounded by commercial retail with housing above; 3. Designing a Hispanic-themed Mercado complex to support a diversity of retail and services; 4. Outlining a courtyard residential block at an urban scale, and; 5. Designating a civic area gateway to Old Town featuring a library, outdoor recreational spaces, patio and dining areas, housing and gateway features on the street-scape.

Two CAED students (one from Landscape Architecture and one from City and Regional Planning) were involved in an award-winning project through Walt Disney Imagineering.

Resilient design and resiliency directed design is becoming part of local, regional and global professional practice. While definitions are still emerging, a working statement by the Resilient Design Institute provides a starting point by stating that “it is the intentional design of buildings, landscapes, communities, and regions in order to respond to natural and manmade disasters and disturbances—as well as long-term changes resulting from climate change…” We seek to improve on this statement through understanding by examining state of the art practice and its outcomes.

Students in a city and regional planning studio course created award-winning land use and urban design proposals for two sites in the city of Milpitas, California. Praised for innovation, creativity and feasibility, the plans blended historical and existing structures in Milpitas with the city's multicultural population and added elements of walkability and commerce yielding a youthful design that is attractive to young professionals and families alike. This case study illustrates how students' on-the-ground work helped solidify theoretical planning concepts learned in other classes.

On September 5, 2017, the City Council unanimously adopted the new Downtown Concept Plan to replace the existing plan. The project is replete with members of the Cal Poly City & Regional Planning (CRP) family.

The original 1993 plan was prepared by five notable local architects and planners. One of these was former city council member and the first director of the Cal Poly CRP program, Professor Ken Schwartz. Ken was involved in the update as a member of the Creative Vision Team for the project.

Faculty members Dr. Michael R. Boswell and Dr. Billy Riggs also worked with the City and a group of CRP students to assist on public engagement with their restreet.com tool.

We are very proud of all the Cal Poly alumni, faculty, and students who worked to make the City of San Luis Obsipo and even more wonderful and well-planned city.

Cal Poly’s City & Regional Planning Department, in partnership with the Governor’s Office of Planning and Research (OPR), hosted the third California Climate Action Planning Conference on Thursday and Friday, Aug. 24-25, 2017. Over 240 climate and energy professionals from around the state attended the conference including Cal Poly students and faculty. The conference featured leaders in the field and an in-depth focus on greenhouse gas emissions reduction and climate adaptation at the local and regional level.

Ken Alex, Director of the Governor's Office of Planning and Research, who opened the conference via video, said that California is “really at the cutting edge of what is going on in climate change response, in the world…We are one of the originators of the Under 2 Coalition which is now almost 200 jurisdictions around the world fighting climate change.”

In addition to Mr. Alex, City of San Luis Obispo Mayor Heidi Harmon and the Chief of Energy and Sustainability at the California State University Chancellor's Office, Aaron Klemm, also provided opening remarks for the conference.

Dr. Michael R. Boswell and Dr. Adrienne Greve are the conference organizers and continue to position Cal Poly as a leader in educating future climate professionals. In addition, they have assisted numerous local and state agencies in the preparation of climate actions plans and other technical plans for addressing the climate crisis. Often these projects involve students who are able to gain hands-on training in the field. Several graduates of the program presented at the conference and are now demonstrating their leadership.

“California continues to be an innovator in addressing the climate crisis,” said Michael R. Boswell, professor of city and regional planning and the conference director. “We are bringing the leaders in the field to Cal Poly to share best practices and inspire each other to create low-carbon, resilient communities.”

The California Planning Foundation (CPF) awards scholarships to outstanding planning students in the State of California. This year they awarded over $58,000 to thirty-one scholarship recipients. Three of those awardees are Cal Poly CRP students: John L. Holder (MCRP), Alyssa Way (MCRP), and Torina Wilson (BSCRP). John received the Outstanding Student Award, which is the highest honor bestowed by CPF. Alyssa received the Paul Wack Cal Poly SLO Scholarship funded by our very own favorite zoner and emeritus faculty member. Torina received the Central Coast Section Award. We are very proud of them!

Here are a few comments for the awardees:

It is support like this from planning faculty, the CPF board and practitioners that will help us get through our planning education and allow us to facilitate sustainable growth in communities throughout the state and beyond.

This scholarship has given me confidence in making a positive impact on communities and the natural environments within California.

I am a first-generation college student without financial support from family, and I cannot express how much scholarships like yours help me in my academic and personal affairs. I would like, from the bottom of my heart, to thank all the CPF board members for all the financial help they send to students through these scholarships.

From Plan Making to Implementation: Weed Gets Needed Housing

The town of Weed, CA lost many of its affordable homes in the 2014 Boles wildland urban interface (WUI) fire. Faced with economic and recovery challenges, this town of 3,000 people in Siskiyou County needed help. It needed a plan and a vision to recover. In 2017, new housing was designed and prototypes were built by students in the College of Architecture and Environmental Design. Townspeople now look forward to workforce homes they can afford.  How did all of this come about?

In 2015, the City and Regional Planning Department’s graduate community planning studio partnered with the town of Weed to prepare a General Plan (GP) update. Eleven students from the master of city and regional planning class, under the guidance of Professor Cornelius Norwursoo, prepared the plan. This update helped Weed apply for state and federal funds, but most importantly it established a vision for the future, and a path to recovery and reconstruction. A set of focused project plans (e.g. trails, main street design, local hazard mitigation) were also prepared in 2016 as part of an advanced studio taught by Professor William Siembieda. Along with the GP a separate Resiliency Plan (RP) was prepared with the support of Great Northern Services (GNS), a local NGO, and Thomas Brandeberry from the Rural Community Development Corporation of California. The RP was a first for a small California town.

Housing for townspeople is an important need for Weed. So how then does Weed get new housing for working class people? The answer was to continue to use expertise in the College of Architecture and Environmental Design for the design and building of housing.  Using the work completed by the planning studio and the local network it established, a CAED integrated project delivery (IPD) studio was organized in 2017. The students designed a seven lot subdivision and built prototype housing at Cal Poly, which can be replicated at the subdivision. GNS is the project client.  An added component of this effort is that the local College of the Siskiyous in Weed could use its construction students to build the houses locally. The IPD studio is run by Professors Greg Starzk from Construction Management, Maggie Kirk from Architecture, and Dennis Bashaw from Architectural Engineering. Some 40 students get hands on experience through participation in this course.  This CAED-Weed partnership is a model of applying learning in the classroom to the practice of improving the lives of people.

This research identified common goals, actions, and design strategies of university campus master plans in the USA, by analyzing 50 randomly selected master plans. Four design strategies were distilled, based on the top goals and actions: transition from (1) a deficient campus to a complete campus, (2) an isolated campus to a contextual campus, (3) a fragmented campus to a cohesive campus, and (4) a brown campus to an ecological campus. In addition, seven campus form dimensions were distilled: (1) land use organization (arrangement of space and facilities), (2) compactness, (3) connectivity, (4) spatial configuration, (6) campus living, (7) greenness, and (8) context. These seven dimensions can provide a theoretical framework for analyzing campus form and guide future empirical research in this area.